Anything can be discussed, tempers may flare.
This forum has no connection with CERN, the LHC or my site.

Forum rules
Any controversial topic can be discussed. Freedom of expression is encouraged. The scientific validity of things posted in this forum may stray from reality quite wildly and the reader is advised to keep that in mind. Please refrain from bad language and DO NOT get overly abusive with other members. You MUST post in English. It is OK to have fiercely intense debate. This forum has no connection with CERN, the LHC or my site. The views here do not represent the forum's views or my views in any way. It is meant as a place to debate or discuss subjects that may create heated debate. Almost no moderation will occur in this forum at all.
Post Reply
1136 posts

Be sure Ivan will find a way to use it for his advantage.
Top

The report confuzed me..

Really what it is saying is that magnetic fields produced by the supernova FOCUSED the energy and produced the gamma ray beams and acceleration.

This makes complete sense and fits into the standard model nicely. Sadly for Ivan. 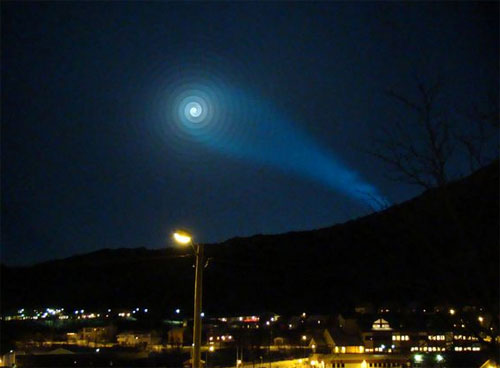 No. Sorry.
That was unsuccessful launch of Russian rocket Bulava.
Top

#13 2009-12-09 Launch from submarine («Dmitriy Donskoy» ?) in the White Sea. The missile malfunctioned creating a spectacular sight throughout northern Norway.[26] Failure

Have to say tho awesome display and its nice of you to get to the truth Ivan and post it, most honorable.
Top

well it does look computer generated however thats because its time lapsed, it was a spiral effect as the rocket was out of control so looks even more awesome in a 5 second still


Here is an english media bit on it, (tho dramatised to be LHC/Project bluebeam/HAARP - wtf are those others ??).

I have to say these photos have freaked me out, but lucky I saw that it was just a missile. I'm glad you can admit to a mistake (sometimes). Tell me, what do you think about the fact we're not dead yet?
Top

Come on, I expect more from you.

Very pretty when rockets take flight. I have not seen the space shuttle, but I understand its breathtaking. We get classified missile taking off from California so these types of things are fairly normal on the west coast of the USA..

ALSO Ivan, I am very disappointed that you didn't even mention my story about magnetic fields and GRB's ?
Top

Dear Xymox!
Tnank you for the link.
http://www.space.com/scienceastronomy/0 ... agnet.html
Indeed, I wrote earlier that GRBs are tightly connected with magnetic holes.

Radius of magnetic hole is proportional to M^(1/3).
Radius of black hole is proportional to M.
If magnetic hole has cylinder like form these radii become equal approximately at M ~ 1/100 of solar mass. That explains repeated novae explosions.
If it has toroidal form the needed mass will be greater. That explains supernovae explosions.

At the moment of equality of these radiuses the collapse changes its nature: from magnetic into gravitational.

Once more, thank you. You had given me one more proving argument of mh’s reality.
http://darkenergy.narod.ru/
Top

Hello Ivan,
Just a quick question about your probability's for destruction.

What number of collisions did you base this percentage on?
Top

Is it possible to create W+, W-, Z bosons at such rate of collisions as now: 2-3 collisions per second?
Top

So no doubt you were wrong by saying:

This was not a wasp of the devil. This was a failed third stage of a rocket combined with atmospheric optics and lit from below by a below the horizon sun.

Its very important to confirm your theories BEFORE alarming people with your guesses.

I think this was a perfect example of why you need to consider your actions.

Lets say you were allowed to tell the world what to do.

In this case you would have caused the entire world to run and take cover. The ensuing panic would have killed untold thousands of people and caused all manner of harm. FOR NO REASON ! After the truth was discovered the millions of people who you caused harm to with your unfounded statements of fact would no doubt come and do great harm to you for killing thousands of people.

Yeah u know its impossible to explain this to kids, and its always them that seem to be the most worried by this stuff, (the hear say chinese whispers rather than fear of the LHC) atm its not so bad, being kept out of the hyped up media.

Kinda goes like "scientist online reckons the world could explode"

It reminds me of my experience. I was happily surfing the net when I suddenly saw a news article titled "scientists will bring the world to an end on Wednesday". After that I'm pretty sure I was close to having a heart attack. Luckily it was only a few days before the experiment, so my intense anxiety ended after the world didn't end, and I was relieved for a while. Then I found out the machine broke, so I started being afraid again. This time my anxiety wasn't that intense, but it still disrupted my life. I found the courage to search on the term online, and after a few months of reading reassuring articles daily, I realized there wasn't a basis for concern. I contacted John Ellis and a number of other physicists who explained to me why there's nothing to be afraid of. The sad thing is that I'm still worried. I started reading about stuff like asteroids, super volcanoes, false vacuum, atom bombs and other doomsday scenarios. Now I have the tools to educate myself on these stuff and find out we're safe, but it's depressing waking up everyday and thinking "what if scientists are wrong and the LHC will cause damage?"